Your body goes through many changes when you become pregnant to help nourish and protect your baby. 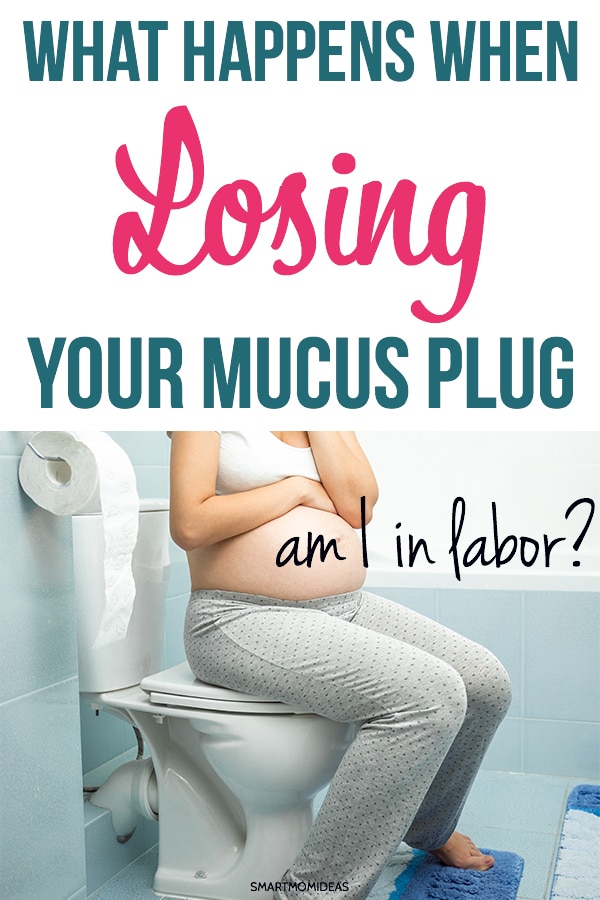 You gain weight, the amount of blood in your body increases, you form a placenta (which is another organ, how amazing!), and form a mucus plug.

But before we get into talking about losing your mucus plug, let’s look at what the actual purpose of the mucus plug is and what its role plays in your pregnancy.

What is a Mucus Plug?

The mucus plug forms early on in your pregnancy.

It is literally a plug made of mucus that your body forms due to the increase in estrogen and progesterone and secretions from the cervix. Although your body only technically forms one mucus plug during pregnancy, it is constantly being renewed with new mucus that your body is producing to keep it fresh.

Its purpose is to create a barrier to keep out unwanted bacteria and pathogens from entering the uterus.

It is different from any other discharge associated with pregnancy and is much thicker in consistency. This can happen during vaginal exams or during sexual activity.

The mucus plug can actually destroy bacteria and neutralize viruses due to lysosomes and antibodies that the mucus produces.

Its antibacterial properties help to kill any harmful bacteria that you might come into contact with from vaginal exams, sexual activity, or any other potential infections.

How to Tell if It’s the Mucus Plug?

The mucus plug can be colored and textured just like any other mucus your body produces.

It can be clear, greenish, yellowish, and even pink. However, it can become much more liquidy and not as gelatinous once it is expelled from your body. The plug itself is about four to five centimeters long or about one ounce in volume.

However, it does not always become expelled from your body all at once which can make it seem like a lot less. You will generally lose your mucus plug somewhere between 37 weeks and 42 weeks of pregnancy.

It can even happen when you are in labor and the baby is coming out. There is no specific time that you are guaranteed to lose your mucus plug. So if you haven’t lost your mucus plug before you go into labor, don’t worry, that just means that your baby will have an extra layer of protection until they are born.

If you lose your mucus plug anytime before 37 weeks, be sure to notify your doctor immediately as this could indicate a premature labor.

Am I Going Into Labor? 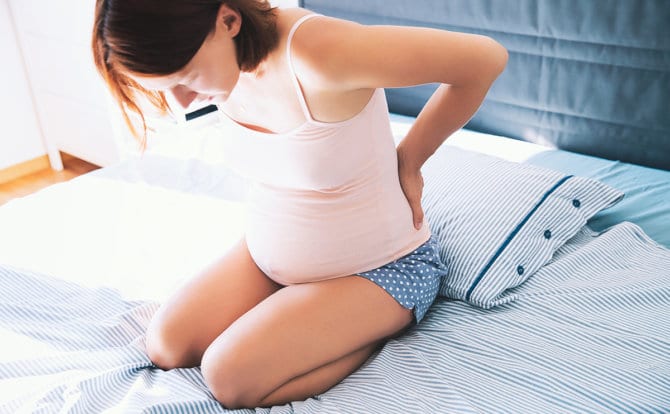 It can be difficult sometimes to tell if you have lost your mucus plug.

But if you have for sure lost your mucus plug, it is a small sign of progress. While not a definitive sign, it can often signal that your labor will be starting soon. Once the baby starts to move into position to be born, or “drops”, your cervix will start to open and begin to soften, or efface to make room for the baby to come out. The mucus plug often falls out during this time as there is nothing to firmly hold it in place.

The pink tinge that you often see in a mucus plug is caused by capillaries in your cervix bursting and small amounts of blood being in the mucus.

If you have already delivered a baby, it is more likely that your mucus plug will fall out all together rather than gradually as your cervix tends to efface quicker than a woman who has never had a child before.

Some women don’t even notice when they lose their mucus plug, others while showering or using the bathroom.

While losing your mucus plug is a sign that your body is getting ready to deliver your baby, don’t rush off to the hospital just yet.

This can be a very early sign of labor. Your actual labor and delivery might be hours, days, or even weeks away. If this is your first baby, there is generally a longer time period between losing your mucus plug and delivery.

If this is not your first baby, then you can expect a shorter time between losing your mucus plug and delivery.

Is This False Labor?

If you have lost your mucus plug you know at this point your body is starting to get prepared for labor.

You are probably dehydrated! I know, the last thing you want to do right now is chug a bunch of water and be having to pee every five seconds. But often times when you become dehydrated you can experience cramping that feels like labor pains.

If you are experiencing what you think are labor pains, drink some water. No, drink a lot of water! If your “labor pains” go away, then you are not actually in labor and you were just experiencing false labor pains.

Are these Braxton Hicks Contractions?

They do however help to prepare the uterus for the actual, real labor and delivery. Whereas real contractions are felt through the entire belly, false labor pains are generally only felt in one area.

False labor also doesn’t show any signs of labor other than feeling contractions. Real labor only occurs when your cervix is opened to ten centimeters. Real labor also includes your water breaking.

You can help to get rid of Braxton Hicks contractions by taking a walk, drinking a lot of water, and getting some rest and relaxation. Lastly, you can also try and soak in a warm bath to help to relieve any pain.

As I said, your mucus plug is there to protect your baby from viruses and bacterial pathogens, however that is not their only source of protection from the ravages of the outside world.

Even if you lose your mucus plug your baby will still be protected in the amniotic sac, which will protect them from any potential infections or bacteria.

While the amniotic sac provides a last line of defence from potential infectious dangers from the outside world, your mucus plug does most of the work as it can actually destroy pathogens it comes into contact with.

If you do lose your mucus plug early, talk with your doctor about any additional precautions you should take to protect your baby.

You might also be familiar with what is called “bloody show,” this is different from losing your mucus plug.

While they are both mucus, bloody show is when blood passes out of the vagina and mixes with mucus.

show often happens after a vaginal exam or even during labor. Bloody show during labor can indicate that things are progressing and you are almost ready to meet your baby!

Every woman has a different experience when losing her mucus plug. Some aren’t even aware of it while it is very distinct in others. It is a normal part of pregnancy and there is nothing you should worry about.

If you do have any concerns, talk to your doctor. Just let your body do what it needs to do and start packing your hospital bag!

Please remember to pin me! 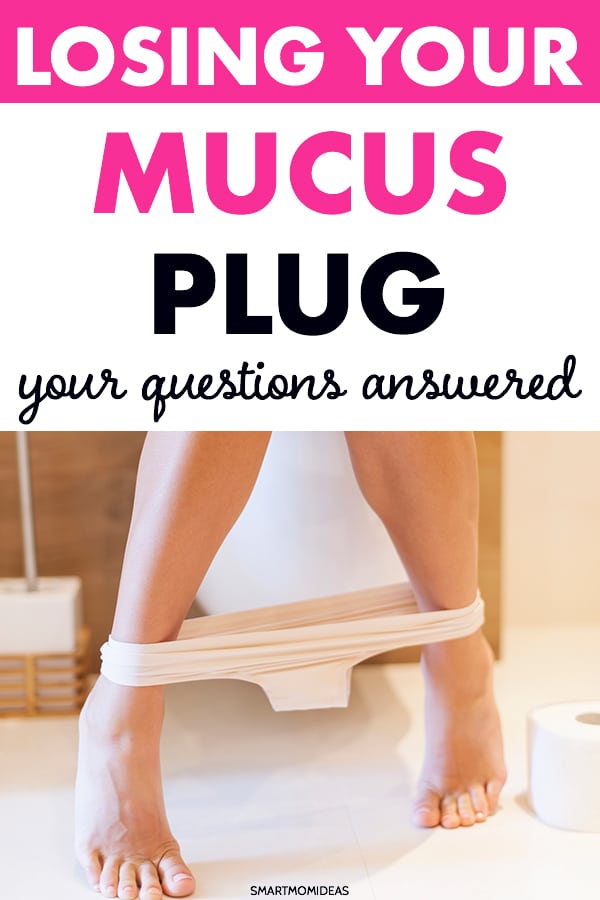 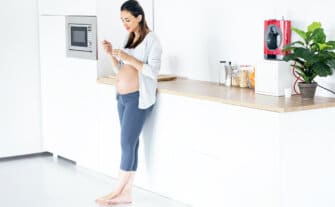 8 Ways to Have a Belly Only Pregnancy 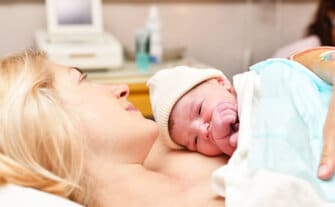 30 Labor and Delivery Terms Every Expectant Mom Should Know

What to Expect At Your First Prenatal Visit